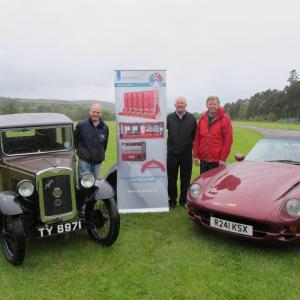 Banchory Rotary Club's annual Vintage Car and Motorcycle Rally, to be held at Milton of Crathes on Sunday, May 31, is heading for a record entry of more than 300 vintage, classic and collectors' cars and motor cycles.

The fun day out for the whole family is again being sponsored for the fourth year running by leading designer and manufacturer of control systems for the global oil and gas industry, EFC Group. More than 290 entries have been confirmed, with entries still being accepted.

This popular charity event, which attracts a large attendance each year to enjoy the spectacle of a large collection of vehicles from a by-gone era, is Banchory Rotary Club's club's major fundraiser. The main beneficiary this year will be CHAS, which provides the only hospice services in Scotland for children and young people who have life-shortening conditions for which there is no known cure. CHAS runs two children's hospices, Rachel House in Kinross and Robin House in Balloch, and a home care service called CHAS at Home.

"We are delighted to support CHAS which provides such a vital service in providing care and comfort for children with terminal illnesses and their families," said club vice-president, Richard Bridger. "A number of local charities will also benefit from the fundraising, all of which goes to the club's charity fund."

Main sponsor, Aberdeen headquartered EFC Group, is a global company which has served the oil and gas industry since 1988. EFC uses the event as an informal, enjoyable bonding day for clients and staff.

"Crathes Vintage Car Rally is not only a fun day out but also serves as a symbol for the close relationship which EFC Group has – and strives to maintain – within the communities in which we operate," said commercial director, Louise McGowan.

The Group has recently delivered on its ambitious annual order book targets a year early by achieving sales of £40 million, due in part to the pioneering Managed Pressure Drilling packages the group has developed, building on its reputation for expert solutions for industry compliant controls.

Mr Bridger said the club was delighted to welcome back EFC Group whose sponsorship over the past three years had been an important element of the fundraising initiative.

"We are grateful to all our sponsors, and particularly our main sponsor, EFC Group, who enable us to put on a fun day for all the family while raising a large sum of money for charity," said Mr Bridger.

The rally includes the opportunity during the morning for vehicle owners to take part in a road run from Crathes to Raemoir, Torphins, Inchmarlo, Banchory and back to Crathes.

Entertainment will include performances by Banchory Pipe Band, side-shows, stalls, tombola and bouncy castle for the kids. There will also be a catering van serving burgers and bacon rolls and another offering ice cream and strawberries and cream.